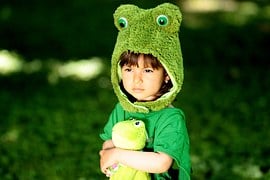 "Wait a minute, Larry. I just put one child in college, braces on another one, and these happy meals are killing me. Now you're telling me there's a tax on my children?"

Well, not directly, but Uncle Sam may have his eye on them. Why?

One of the more popular tax planning ideas is the shifting of income to a taxpayer who is in a lower tax bracket. Parents generally have a higher income than their kids, and so investment assets are often transferred to young children, through the use of trusts or custodial accounts, thus taking advantage of lower rates.

Is this a good idea? Does this lower the amount of taxes you'll have to pay?

There's not much that the average taxpayer hasn't thought of that the IRS hasn't also considered. Families are today prevented from shifting large amounts of unearned income to children in order to shield the funds from taxation. The provision that limits this income shifting is known as the kiddie tax.

The kiddie tax effectively eliminates this tactic of transferring assets to your kids as a tax sheltering technique. Here are some key points:

* If a child is under the age of 19 at the end of the tax year, or under 24 and a full time student, and has unearned income above above $2100 the child will be taxed at the parents rate.

*This rule applies to income generated by any asset the child owns, whether or not the asset was received from the parents or not. An exception applies to income from certain disability trusts that are qualified under Social Security laws.

* The tax does not apply if the child is married and files a joint return with his or her spouse.

Here's an example of how the kiddie tax would apply:

It's a bit complicated, but the bottom line is that the IRS is going to get their money. Transferring large amounts of assets to your children will not escape their notice.

Other Rules May Apply

The three main rules listed above are not the only qualifiers for the kiddie tax. There are a number of exceptions and unusual circumstances which would change the calculation. They are too numerous to go into here, but you can see that, as tax strategies go, transferring assets to your children may give you an unpleasant surprise. A good financial planner or tax advisor can advise you on the rules and things that you need to look out for.