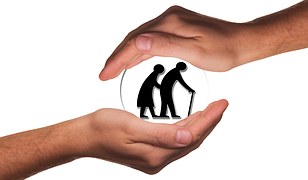 A number of years ago I was working with a gentleman in setting up a plan for his long-term care. The plan included a comprehensive LTC policy that would cover his expenses no matter where the care was received, either at home or in an institution. One of my suggestions is to always talk this over with your family before making such a purchase, if for no other reason than to let the kids know that you have the coverage.

Well, in this particular case, when the Dad told his son what he was doing, the young man threw a fit. The client contacted me and said that he needed to cancel the coverage. His words to me were, "my son was really upset that I had gotten that policy. He told me to get rid of it.....that HE would take care of me!" In they eyes of this fellow, the purchase of insurance implied that he wasn't willing to take care of his Dad. Of course that's ridiculous. LTC insurance isn't meant to replace the family as caregivers, it's to help them do a better job of caregiving, and for a longer period of time.

Being a full-time caregiver is very demanding, and you may not be healthy enough yourself to do it. When that happens, outside caregivers will have to be acquired, which can be very expensive. As I mentioned in a previous post ( see LTC Funding Options )  when it comes to paying for palliative care there are basically three options:

In this post we'll look at number two: self funding.

Alfred E. Newman was the poster child of Mad magazine. He was a somewhat homely looking fellow whose tag line was, "What, me worry?" One look at Alfred E. and you instinctively knew that he should probably be worried.

Should you worry about how you'll pay for a long period of palliative care? Maybe not. Perhaps your bank account is such that this isn't likely to cause a problem for you. If it happens you'll just deal with it. But should you handle it this way?

Ed and Kathy are pretty average. He was an engineer with IBM and she was a nurse. Between the two of them they managed to accumulate over a million dollars in tax-deferred accounts and Ed receives a very comfortable pension. The threat of hardship seems remote. It seems silly to pay $350 a month for something they may never need.

A few years after retiring, Ed passes away. Kathy will continue receiving money from his pension, but the amount will cut in half! She didn't know that would happen. She adjusts her lifestyle accordingly, and carries on.

Now Kathy is in her upper seventies. She has spent her portfolio, which is 100% invested in the market, down to a little less than $900,000. Then, suddenly, the market tumbles. In four months her brokerage account is down more than 45% (remember 2008?). As she worries about how in the world she'll make this money last, she is diagnosed with Alzheimers.

The only solution for Kathy is high intensity palliative care in an institution, at a cost of over $100,000 a year. All of a sudden the children find themselves in a desperate situation, and the odds of having to sell off assets are increasing.

What could have prevented this?

The purchase of a good LTC policy along with moving more of the investment portfolio to safety would have left Kathy and her family in fine shape financially. The 50% decrease in pension funds also should have been planned for.

Bill Lewis had been one of the best heart surgeons in the state. He and his wife Nancy retired in very good shape financially. Along with nearly $3 million in an IRA, they also owned extensive real estate, and collected rental income to the tune of $75,000 a year. Bill and Nancy thought the purchase of long-term care insurance unnecessary.

A couple of years after Dr. Lewis retired his wife was in a serious car crash. Her medical bills added up to more than $300,000, the majority of which was paid by Medicare. She was, however, left a complete invalid. Soon it was more than Bill could do to take care of her. Nancy spent the last ten years of her life in one of the finest institutions in the state, at a total cost of nearly $1.5 million dollars. Bill was easily able to afford this.

He could have taken a portion of his rental income each year to purchase a good LTC policy on he and his wife. Such a policy may have cost somewhere between $8-10K per year, easily affordable for him, and would have resulted in significant savings for he and his family. Instead of spending well over a million dollars, the cost would have been less than $200,000, a savings of $1.3 million!

Barry Wuffet is one of the richest fellows in the United States. His total net worth is over a billion dollars! Why on earth would Barry ever purchase LTC insurance?

For the same reason that Dr. Bill did.

Barry has managed to shelter his estate from taxation quite effectively through the use of trusts, a family foundation, and offshore holdings. A great deal of his annual cash flow comes from mandatory trust and foundation payments.

Rather than pay gigantic palliative care bills, should they occur, Barry would be better advised to purchase a single-premium LTC policy through one of the companies he owns, where he'd also receive a tax deduction. In fact a good planner can effectively structure a policy this way, and it will end up being no cost to the client! (This could have possibly been done for Dr. Bill as well, if he owned his own practice.)

There's Only One Good Reason Not to Own Long-term Care Insurance:

You can't afford it.

As you can see from the examples above, LTC coverage can be a very valuable asset. It will protect your portfolio, your lifestyle, and maybe your estate. If you can afford it, you should have it.

What if you can't?

That will be the subject of our next post, as we discuss what government assistance looks like as a solution.

* These examples are for illustrative purposes only and do not take into account any one individual's investment objectives, financial situation or needs. The information is not intended to be used as the sole basis for financial decisions.