Paying the bill for Long-Term Care 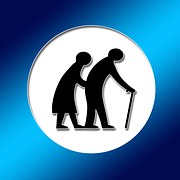 In the blink of an eye

David and his wife Shirley were enjoying their lives together. They'd been married for 53 years, had 3 children and 6 grandchildren, and were active in their church and community. Life was very good, and they had both been blessed beyond measure.

One evening as they were watching TV David noticed that his wife got up to go to the restroom. This wasn't unusual, but something was different this time. She returned, having not found the bathroom, and she seemed quite disoriented. David asked her what was wrong, and what happened next frightened him terribly. When she answered him it came out as gibberish. She couldn't speak! He also noticed that she had wet herself, and the frightened look on her face told him that she too, knew that something was wrong. As quickly as he could he dialed 911.

The prognosis wasn't good. Shirley had had a stroke, which left her unable to walk, there was no mobility of any kind on her left side, there were some cognitive issues, and she couldn't communicate. After several days in the hospital, and two weeks in a rehab unit, he took his beloved wife home.

But his normal life was gone. At first David tried as best he could to take care of her, but his strength and stamina were not up to the task. His children flew in to help, but after a couple of weeks they all had to return home, which wasn't near their parents. He was exhausted, discouraged, and depressed.

What could David do?

He began to bring in home health caregivers. They cost $20 an hour and Shirley needed care around the clock. He was able to keep this up for almost a year, but eventually David knew he'd have to turn Shirley over to someone who could really take care of her. She would have to go to an institution.

In just a few short minutes that night, everything had changed for David and Shirley. Their financial picture had changed too, and not for the better. David was truly worried now about running out of money. *

Having been through a similar scenario myself with my own parents, I can tell you that this is one of the most difficult and discouraging situations that you'll ever face. The emotional and physical drain is unbelievable. The financial challenges are also quite daunting.

As I mentioned in my last post ( see LTC Funding Options )  when it comes to paying for palliative care there are basically three options:

In this post let's take a look at the first, and best option: long-term care insurance.

As the costs of paying for care grew higher and higher, it became obvious to insurers that here was a market for coverage. After all, not many people are prepared for this kind of financial drain on their retirement portfolio. The family could easily spend over $100,000 a year, and for how long? Who could say?

Several insurers began to construct policies to cover palliative care expenses. Met Life, John Hancock, Genworth, and Prudential have all gotten into the market (some have since dropped out), and offer coverage. Some highlights:

* LTC insurance can be expensive. A typical policy covering husband and wife will usually run in excess of $300 a month. In addition, these prices are not set in stone. In other words, there may be future price increases of as much as 20%! As a result, this type of insurance tends to be purchased by the more affluent. I will state that I have rarely seen anyone who had a policy let it lapse. It is seen as a valuable resource, and it is.

* You may not qualify for coverage. Underwriting standards for LTC coverage can be stiff. As much as we don't like that, it does tend to keep prices lower. If you are one of those folks declined for coverage, however, you probably won't be bubbling over with love for the insurance company. The key to getting this coverage, and also to making it more affordable, is to buy it when younger: age 50-55 is the sweet spot.

* Hybrid products exist. One of the big objections to purchasing LTC insurance is that, if you never use the coverage, look at all the money you've wasted in premiums. Insurance companies have responded to this objection by developping hybrid LTC products. One example is a life insurance/ long-term care combination policy. If you never use the LTC benefit, or even just part of it, the rest will go back to your beneficiaries as an insurance payment. There are also single payment LTC products that you can remove your money from if you need it for anything else. Your financial planner will be familiar with these solutions.

Long-term Care Insurance is the Most Cost Efficient

Why did I say that of the three my choice is long-term care insurance?

Here's why: (1) it's the most cost effective. It beats self-funding by a mile because it leverages your money very effectively. (2) It will protect your financial portfolio, and hence, you and your family's way of life, as well as leave assets to your heirs. (3) It will allow you to take better care of your loved one. Your health won't suffer and you'll have the freedom to be there to love them. (4) It will give you the freedom to offer care where you want, and not where the government says you must. LTC insurance puts you in the drivers seat, and not some bureaucrat. Many folks think that LTC insurance is all about paying for a nursing home. It's not. It's about giving you the freedom to be able to keep your beloved at home where they belong, and where they want to be. **

Are you going through some life circumstance that concerns your financial situation? I'd be happy to answer any questions you might have. Just click below and I'll be in touch:

* This example is for illustrative purposes only and does not take into account any one individuals investment objectives, financial situation or needs. The information is not intended to be used as the sole basis for financial decisions.

** This content is provided for informational purposes only and is not a solicitation to buy or sell any products mentioned.