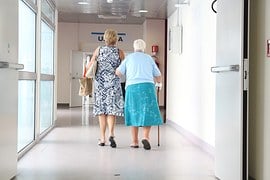 Ready for what? Ready to live a long life.

Everyone dreams of living a long and productive life. The good news is that, today you most likely will. Advances in healthcare have drastically extended the number of years the average human can expect to live.

A diagnosis of cancer was once a death sentence. Not anymore. With the use of extensive chemotherapy, radiation, and other treatments, many patients continue living for years after a cancer diagnosis. It's the same with strokes.

These episodes may be quite expensive, however. The average bill for nursing home expenses may exceed $80,000 a year. How would your financial plan withstand such a drawdown? Could you endure a 3-5 year stretch of paying such expenses, which is a typical timeframe?

Does your plan take into account the possibility of an extended long-term care event?

I was once speaking with a husband and wife on this subject. I'll never forget what he said to me. He looked me in the eye and declared, "I keep a loaded shotgun over my mantle. I've instructed my wife to use it on me when I need that level of care." I assumed he was joking.

If you believe that the shotgun option is really a viable solution for you, then read no further. The truth is, however, that you won't realize what a big problem this is until the day that it hits you like a brick wall.

Mary and Bob were the closest of couples. Their retirement plans had included traveling around the country in their RV. They had actually made several trips out west together. Life was good and there was another trip planned next summer. Just before Christmas, everything changed. Bob had a severe stroke. He survived, but lost the ability to use his legs, and his speech. All of a sudden Mary's role went from being the second driver of the RV, to primary caregiver. He needed help with everything from bathing to going to the bathroom. Bob weighed 255 lbs. and Mary was 135. Soon she had to face the facts: she would need some help taking care of her love. She simply couldn't do it.

She assumed that Medicare would help with long-term care expenses. She was wrong. Medicare only pays for curative care, i.e. when someone is expected to recover. With about $200,000 in an IRA, she was shocked to discover that this would only last a couple of years when paying long-term care expenses. And then what? What would she live on after that? Would she have to sell her home? Live with her children? All of a sudden Mary was overwhelmed. Everything in her life had changed. How on earth would she cope with all of this?

The Situation Above is Not Unusual

Even though Bob and Mary are fictional people in my story, the situation described is not unusual.

Have you given any thought to how you'd handle this scenario in your own life? You should. Essentially, there are three ways to cover long-term care expenses:

2. Pay the bill yourself

In the next few blogs I'm going to discuss some of the implications of each of these solutions. You might be surprised at what you'll learn.

Are you going through some life circumstance that concerns your financial situation? I'd be happy to answer any questions you might have. Just click below and I'll be in touch: