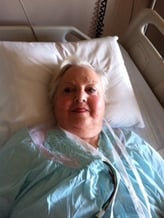 Recently I had the honor and privilege

of being a caregiver for my Mother-in Law, Willa Tippett. Known to everyone in the family as Bill, she was born in the little mountain town of Cashiers, NC to Andy and Roxie Cloer. Andy was a Baptist minister and his influence reached into generations of good mountain people. People who feared God and tried to honor Him, and all of their children were blessed because of it. Bill was a beneficiary of her Father's faithfulness.

She grew up in countryside that mirrors Heaven itself, with clear mountain streams to fish in and fresh air to breathe. With two brothers and two sisters as companions, she lived a life filled with love, playfulness, and happiness. As she grew she learned the value of hard work. 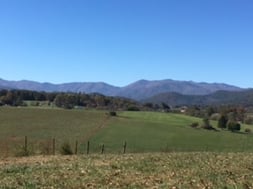 Eventually she met and married her husband, John Tippett, who became her earthly companion of sixty years. Bill is the love of his life.

Seven years ago Bill was diagnosed with

Histiocytosis, a rare form of cancer. The doctors decided that they could not cure her, but her condition could be "managed" with chemotherapy. Nobody knew what was ahead for her. In the next few years Bill would only have a handful of good days. Most of the time she was sick to her stomach and weak. Yet she carried on. No better husband was ever had by anyone than Bill, as John spent himself caring for his beloved wife and friend. They were inseparable, and he continued to encourage her. He cooked for her when she didn't feel like eating. He took her on drives through their beautiful countryside. They went fishing together, sometimes he had to hold the rod. Bill loved to fish, and she was good at it. When no one else could catch a thing, Bill would come home with a stringer full. 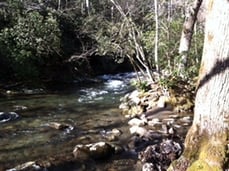 A couple of weeks ago Bill's struggle began to come to an end. Diagnosed with Pneumonia, and so weakened by chemotherapy, the doctors said there was nothing else they could do for her. Hospice was called in.

As I sat by Bill's side, taking turns with her family while we attended to her, I saw a side of life that I have come to sorely miss. John and Bill's home filled up with family and friends, neighbors and cousins, church members, and cousins. They all wanted to be by her side. And not just for a few minutes....they stayed all night with us. And for days. The house was constantly filled with food brought by everyone. Folks stepped in to clean without being asked. It was the most beautiful expression of family love I have ever seen, and I have been deeply moved by it. In this day of McFunerals and rushing selfishly through sending off those we love, it seemed to me that this is the way families are supposed to behave. I am sad that my own family had not been this close.

Bill's departure from this world was ushered in by a family who loved her deeply, a family who can't imagine life without her. I will  miss her more than anyone knows, and I'm just her son-in-law. I remember her laughing so hard at some of my stupid pranks, and her absolute enthusiasm for everything she did. She created a generation of good people, strong people, to leave behind, and she lived a very good life. We should not be sad for her, because she is no longer sick, but is safe in the hands of her Savior. She has defeated her cancer. The Bible says that:

"The generous soul will be made rich,
And he who waters will also be watered himself." (Proverbs 11:25)

Bill was a generous soul. She made everyone around her rich. Although her bank account didn't reflect it, she was rich too, and she knew it.

You are probably wondering why...

any of these thoughts would appear in a financial blog.

Because life does not consist of what you have, but in what you share with others. These are the true investments that pay off eternally. Our portfolios grow, and shrink. Our plans may succeed, or they may fail. I speak a lot about the legacy that we'd like to leave, because whether we want to admit it or not, we will be leaving one day. We will choose now, today, what we want that legacy to be.There's nothing wrong with making wise financial decisions, or growing your portfolio, but remember that in the end, the only thing you'll take with you is the love you've left behind. So store up your treasure in Heaven, where rust and thieves and moths cannot take them away from you.That's what she did.

So long Bill. I hope you are trout fishing today. I, and all of the rest of those you love, will be along shortly.